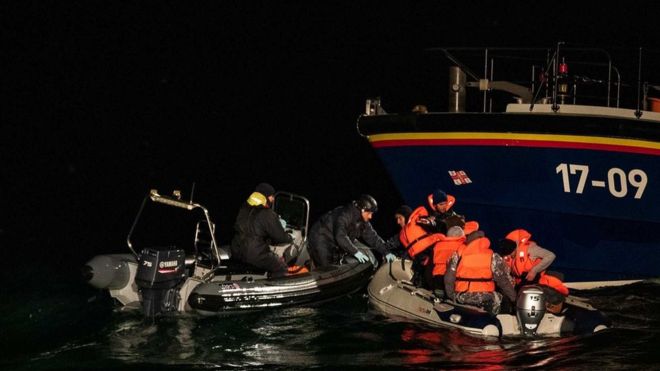 The rising number of migrants attempting to cross the Channel in small boats has been declared a “major incident” by the UK home secretary.

Sajid Javid has asked for an urgent call with his French counterpart about the situation.

The Home Office said there was “concern that it is only a matter of time before people lose their lives”.

It comes after at least 221 migrants have attempted to cross the Channel to England since the start of November.

Most recently, 12 people were detained off the coast of Dover in the early hours of Friday morning.

Officials on both sides of the Channel have warned of the dangers of crossing what is the world’s busiest shipping lane in a small boat. Police have likened the journey to trying to “cross the M25 at rush-hour on foot”.

In a statement, the Home Office said Mr Javid had “taken control of the response” to the situation.

Mr Javid has been appointed “gold commander”, meaning he has ultimate responsibility for the handling and outcome of the incident and sets out a strategy of how to deal with it.

He will now receive daily updates from the Home Office, and has spoken to Border Force officials, Immigration Enforcement and the National Crime Agency in a conference call.

The Home Office added: “The home secretary has also asked for an urgent call with his French counterpart over the weekend to reaffirm the continuing need for the UK and France to work closely together to tackle the problem.

“He has also commissioned detailed options from Border Force about the provision of additional vessels in the Channel, including another Border Force cutter, and whether this is likely to encourage more people to try and make the crossing rather than act as a deterrence.”

Bridget Chapman, from the charity Kent Refugee Action Network, said the situation was in part a result of UK measures to “beef up the security around Calais”.

“We’ve put a big fence up to prevent people from accessing trains and lorries and people are resorting to other methods to get here,” she told the BBC.

“It’s winter, but the weather has been quite good. And I expect people traffickers are exploiting people, saying, ‘You know, things are going to tighten up after Brexit, you need to go now.'”

Many of the migrants are Iranian or Syrian.

More than five million Syrians have left their country since its civil war started in 2011, and in the past two years, Iranian citizens have made more UK asylum applications than any other nationality according to Home Office figures.

A BBC South East investigation last month found that people smugglers were telling migrants they must enter before “the borders shut properly” after Brexit.

British and French authorities have both said the rise in crossings is the result of “organised criminality” and “mafia networks”.

Earlier, Immigration Minister Caroline Nokes said the number of incidents over recent days was “deeply concerning” and crossing the water in a dinghy was “extremely dangerous”.

She is due to visit Border Force officers in Dover on Saturday to discuss the situation.